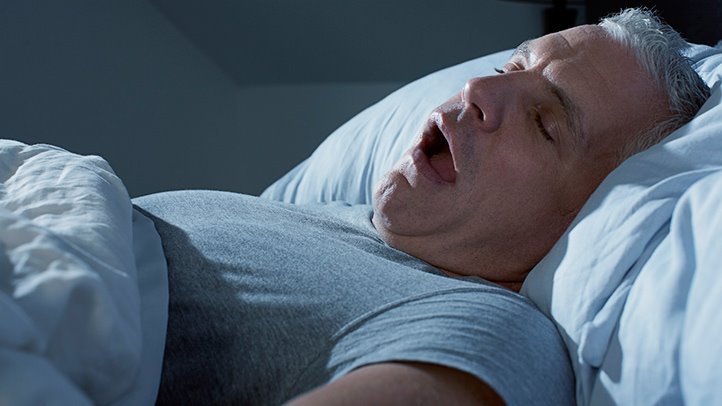 Many people treat snoring as a joke or something to feel embarrassed about. But loud snoring—especially when accompanied by daytime fatigue—may be a sign of sleep apnea, a common disorder in which breathing repeatedly stops and starts as you sleep. Sleep apnea can leave you feeling exhausted during the day, affect your mood and your relationship with your bed partner, and even be dangerous to your health.

What Is Sleep Apnea?
Sleep apnea is a serious sleep disorder that occurs when a person's breathing is interrupted during sleep. People with untreated sleep apnea stop breathing repeatedly during their sleep, sometimes hundreds of times. This means the brain -- and the rest of the body -- may not get enough oxygen.


Who Gets Sleep Apnea?
Sleep apnea can make you wake up in the morning feeling tired or unrefreshed even though you have had a full night of sleep. During the day, you may feel fatigued, have difficulty concentrating or you may even unintentionally fall asleep. This is because your body is waking up numerous times throughout the night, even though you might not be conscious of each awakening.

The lack of oxygen your body receives can have negative long-term consequences for your health. This includes:


Treating Sleep Apnea
While a diagnosis of sleep apnea can be scary, it is a treatable condition. In fact, there are many things you can do on your own to help, particularly for mild to moderate sleep apnea. Home remedies and lifestyle modifications can go a long way in reducing sleep apnea symptoms. However, they should not replace medical evaluation and treatment. People who are overweight have extra tissue in the back of their throat, which can fall down over the airway and block the flow of air into the lungs while they sleep. Even a small amount of weight loss can open up your throat and improve sleep apnea symptoms.

Smoking contributes to sleep apnea by increasing inflammation and fluid retention in your throat and upper airway. Avoid alcohol, sleeping pills, and sedatives, especially before bedtime, because they relax the muscles in the throat and interfere with breathing. Exercise regularly. As well as helping you lose weight, regular exercise can have a major effect on the duration and quality of sleep. Aerobic and resistance training can help reduce sleep apnea symptoms, while yoga is also good for strengthening the muscles in your airways and improving breathing. Avoid caffeine and heavy meals within two hours of going to bed. Maintain regular sleep hours. Avoid sleeping on your back which makes it more likely for your tongue and soft tissues to obstruct your airway.